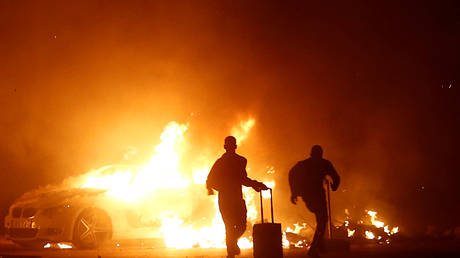 Vandals in Strasbourg, France, marked the start of 2020 by setting countless vehicles on fire. Videos on social media purportedly show shocking acts of arson that took place across the city.

Police have not disclosed how many cars were torched, but a source told AFP that the figure was larger than the previous year. A number of arrests and some minor injuries have also been reported.

The footage circulating on social media appear to show vehicles, many of them overturned, on fire in the streets of Strasbourg. One clip shows a car passing by a series of torched vehicles along the road – an eerie sight to behold on what is typically a joyous evening of champagne-fueled celebration.

Riot police can be seen dodging between flame-engulfed cars as they attempt to restore order to the city.

The burning of vehicles is an unfortunate New Year’s tradition in some parts of France. According to local media, 1,031 vehicles were set alight nationwide on the night of December 31, 2018, compared to 935 on the previous New Year’s Eve.

Numerous cars TORCHED during New Year’s Eve mayhem in Strasbourg, France (VIDEOS)
Israeli Prime Minister Benjamin Netanyahu has confirmed he will seek parliamentary immunity from prosecution in multiple corruption cases hanging over him ahead of upcoming March elections. In a speech at...
7 Likes

Numerous cars TORCHED during New Year’s Eve mayhem in Strasbourg, France (VIDEOS)
Thousands of nationalists In Kiev have celebrated the New Year with torchlight parades in honor of Stepan Bandera, a WWII nationalist regarded by modern Ukrainians as a hero and by...
6 Likes

Numerous cars TORCHED during New Year’s Eve mayhem in Strasbourg, France (VIDEOS)
There was no sense of festive goodwill from Jose Mourinho after he was yellow-carded in Tottenham's loss at Southampton for appearing to read the tactics being jotted down by a...
8 Likes