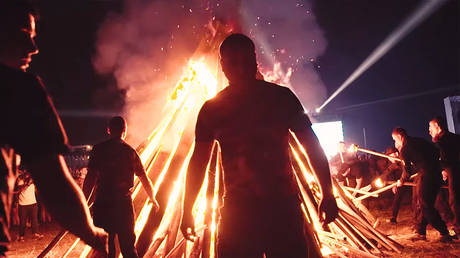 Thousands of nationalists In Kiev have celebrated the New Year with torchlight parades in honor of Stepan Bandera, a WWII nationalist regarded by modern Ukrainians as a hero and by Poles, Jews and Russians as a war criminal.

Blue-and-yellow Ukrainian national flags mingled with red-and-black banners of the Bandera’s Organization of Ukrainian Nationalists (OUN) and its armed wing, the Ukrainian Insurgent Army (UPA), responsible for the mass murder and persecution in what is today western Ukraine, during the last years of the Second World War.

Carrying lit torches, marchers chanted slogans such as “Ukraine before everything,” “Glory to Ukraine, death to enemies,” and “Glory to Ukraine, glory to heroes!” – the latter a WWII-era slogan of the OUN-UPA that came to be widely adopted since the 2014 coup first by the ultra-nationalists, and then by the government and the military.

The event in the capital featured some participants dressed up in period uniforms, while others carried Bandera’s photos as if they were icons in a church procession.

The soundtrack to the menacing cortege was provided by a band of well-coordinated drummers. The musicians were sporting military-style uniforms and had their faces covered with balaclavas. The rally was agreed with the city authorities, who deployed a large police force along its route.

Bandera’s birthday, January 1, has been a national holiday in Ukraine since 2019. He was born in 1909, in what was the Austro-Hungarian province of Galicia (Galizien) at the time, and became part of Poland after the First World War. While the OUN got its start agitating against the Polish rule, Bandera emerged as a leader of a hardline faction in 1940, hoping to establish an independent Ukrainian state with the help of Nazi Germany.

Ukrainian nationalists point out that the Germans initially had no use for Bandera and the OUN, taking him under house arrest in 1941 before sending him to the Sachsenhausen concentration camp. However, they did release Bandera in 1944, hoping that his UPA militants would help the Wehrmacht hold back the Soviet advance.

Following the Allied victory, the OUN-UPA switched sponsors, from the defeated Nazis to the victorious Western Allies. Bandera moved to West Germany, where he continued to agitate for “free Ukraine” at the dawn of the Cold War. He was killed in 1959, when a KGB assassin shot him with a cyanide-loaded dart.

After Ukraine became independent in 1991, nationalists have sought to establish Bandera as a national hero, over objections from Russia, Poland and Israel. He was honored with the title of “Hero of Ukraine” by the Ukrainian government in 2010 – only for that title to be stripped by a court months later and by a new administration, amid a vast international outcry.

Heil Bandera: Ukrainian nationalists hold torchlight parade to celebrate Nazi collaborator’s birthday
Israeli Prime Minister Benjamin Netanyahu has confirmed he will seek parliamentary immunity from prosecution in multiple corruption cases hanging over him ahead of upcoming March elections. In a speech at...
7 Likes

Heil Bandera: Ukrainian nationalists hold torchlight parade to celebrate Nazi collaborator’s birthday
There was no sense of festive goodwill from Jose Mourinho after he was yellow-carded in Tottenham's loss at Southampton for appearing to read the tactics being jotted down by a...
8 Likes