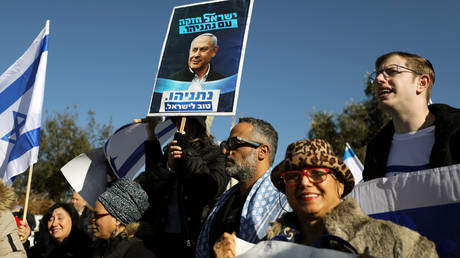 Israeli Prime Minister Benjamin Netanyahu has confirmed he will seek parliamentary immunity from prosecution in multiple corruption cases hanging over him ahead of upcoming March elections.

In a speech at Jerusalem’s Orient Hotel on Wednesday, Netanyahu clarified his intention to seek immunity, saying it would only be “temporary” and last the duration of the next parliamentary session. “There is no possibility for anyone to avoid standing trial,” he said.

The PM added that he had never promoted or altered any law in an effort to avoid standing trial and that the immunity law exists to “protect elected officials from political lawsuits.”

Netanyahu slammed the corruption charges against him as being politically motivated and pushed by people with “hidden motivations.” He said it was “very difficult” for his opponents and enemies to witness achievements under his leadership that made Israel the “eighth superpower in the world.”

Netanyahu spent the remainder of his speech targeting political rivals including Blue and White party leader Benny Gantz. Both Netanyahu and Gantz were left unable to form a government after elections last year.

On Tuesday, Israeli High Court judges rejected a petition filed by academics, former defense officials and other public figures attempting to ban Netanyahu from seeking reelection due to the corruption charges levelled against him.

He is charged with bribery, fraud and breach of public trust in three cases.

Netanyahu says he’ll seek immunity from prosecution in corruption cases
Thousands of nationalists In Kiev have celebrated the New Year with torchlight parades in honor of Stepan Bandera, a WWII nationalist regarded by modern Ukrainians as a hero and by...
6 Likes

Netanyahu says he’ll seek immunity from prosecution in corruption cases
There was no sense of festive goodwill from Jose Mourinho after he was yellow-carded in Tottenham's loss at Southampton for appearing to read the tactics being jotted down by a...
8 Likes