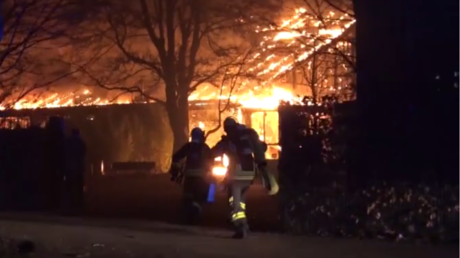 A fire reportedly caused by New Year’s Eve fireworks burnt down the monkey house at a zoo in Germany, killing all of the chimpanzees, orangutans and gorillas inside. More than 30 animals died in the horrific blaze.

Krefeld Zoo announced that it had suffered an “unfathomable tragedy” on New Year’s Eve, after its monkey sanctuary “burned down to the foundation.” Fruit bats and birds were also killed in the accident, according to media reports.

The zoo confirmed that there were no survivors in the ape house, but said the nearby exhibit – which houses a gorilla and his family – escaped unscathed.

A Ruptly video shows firefighters rushing toward the building as flames engulf what remains of the structure. With the fire extinguished, an emergency worker can be seen peering into the sanctuary’s charred remains, perhaps in hopes of finding a furry survivor.

The zoo thanked the public for the support it had received, but said it was “still in shock” and “cannot yet say exactly if and where help is needed.”

No survivors: New Year’s fire at German zoo kills ALL animals inside monkey sanctuary (VIDEO)
Israeli Prime Minister Benjamin Netanyahu has confirmed he will seek parliamentary immunity from prosecution in multiple corruption cases hanging over him ahead of upcoming March elections. In a speech at...
7 Likes

No survivors: New Year’s fire at German zoo kills ALL animals inside monkey sanctuary (VIDEO)
Thousands of nationalists In Kiev have celebrated the New Year with torchlight parades in honor of Stepan Bandera, a WWII nationalist regarded by modern Ukrainians as a hero and by...
6 Likes

No survivors: New Year’s fire at German zoo kills ALL animals inside monkey sanctuary (VIDEO)
There was no sense of festive goodwill from Jose Mourinho after he was yellow-carded in Tottenham's loss at Southampton for appearing to read the tactics being jotted down by a...
8 Likes