‘An absolute joke’: More VAR controversy as Jack Grealish goal ruled out for offside because of teammate’s HEEL

'An absolute joke': More VAR controversy as Jack Grealish goal ruled out for offside because of teammate's HEEL 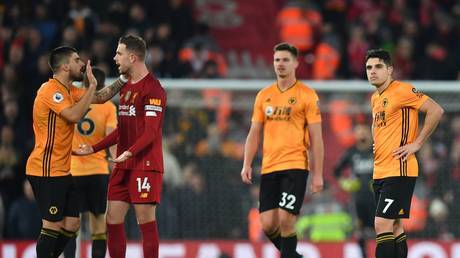 It didn’t take long for the first VAR controversy of 2020 after a Jack Grealish strike was ruled out for Aston Villa in their early kick-off at Burnley after replays appeared to show that forward Wesley was millimeteres offside.

After a period of consultation with the video referee referee Michael Oliver ruled out the Villa skipper’s early goal, prompting football fans to once again voice their discontent with what they see as the overly-officious nature of the video technology which was intended to remove, not insert, doubt into the game.

The replay showed Brazilian forward Wesley, a big-money import from the Belgian league during the summer, appearing to be in line with Burnely’s last man but that wasn’t the opinion of the official who adjudged that Wesley’s heel was in an offside position.

The call ignited another furious debate on social media as to the role of VAR in football and comes after a series of controversial calls in the Premier League last week which affected several results.

One thing I would say is – at least it’s consistently bad. Like there’s one of these decisions every week so it’s fair but it’s wrong. pic.twitter.com/KO0p2TAIlf

This is an absolute joke. This is ridiculous. pic.twitter.com/BI6dcyCoEn

VAR starting 2020 showing why it needs to return to original aim. Clear/obvious. Grealish goal ruled out for fractional Wesley offside in #BURAVL. Who believes decision by technician quickly drawing lines is 100% accurate apart from PGMOL? Game’s about goalscorers not Mike Riley.

However, Aston Villa fans’ frustration was short-lived as both men involved in the controversial call had a measure of revenge by hitting the scoresheet later in the game.

Wesley atoned by finding the net on 27 minutes to give his team a lead which was then doubled four minutes before halftime by Grealish, who powered a thunderous strike into the roof of the net.

VAR’s interjection, though, will remain a key talking point not just from this game but, one feels, throughout the rest of the season – and perhaps decade.

'An absolute joke': More VAR controversy as Jack Grealish goal ruled out for offside because of teammate's HEEL
Israeli Prime Minister Benjamin Netanyahu has confirmed he will seek parliamentary immunity from prosecution in multiple corruption cases hanging over him ahead of upcoming March elections. In a speech at...
7 Likes

'An absolute joke': More VAR controversy as Jack Grealish goal ruled out for offside because of teammate's HEEL
Thousands of nationalists In Kiev have celebrated the New Year with torchlight parades in honor of Stepan Bandera, a WWII nationalist regarded by modern Ukrainians as a hero and by...
6 Likes

'An absolute joke': More VAR controversy as Jack Grealish goal ruled out for offside because of teammate's HEEL
There was no sense of festive goodwill from Jose Mourinho after he was yellow-carded in Tottenham's loss at Southampton for appearing to read the tactics being jotted down by a...
8 Likes