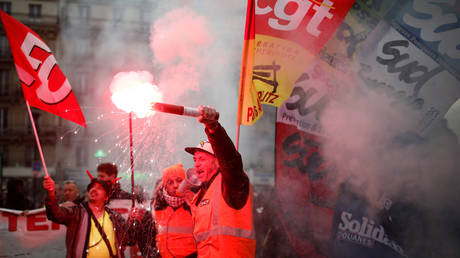 US President Donald Trump has taken a swipe at his French counterpart Emmanuel Macron, highlighting a series of heated protests unfolding across France over a hot-button pension reform and poking fun at the Paris climate deal.

From his perch on Twitter, President Trump shared a brief video clip showing a line of parked cars set ablaze in Paris on the cusp of the New Year on Tuesday, adding only a simple caption:

How is the Paris Accord doing? Don’t ask!

How is the Paris Accord doing? Don’t ask! https://t.co/9N0yibmDkj

While the motive behind the sizable (and likely quite expensive) car-b-que remains unknown, the arson comes amid mass demonstrations around the country in opposition to an overhaul of the French pension system, which in some cases have erupted into violent street clashes with riot police. Trade unions and other labor organizations have organized mass strikes and walkouts over the proposal, which the government insists will simplify the pension system and ensure it is “fair.”

The wave of anti-pension reform demonstrations follows another protest movement sparked last year by a fuel tax hike, the ‘Yellow Vests,’ who have continued to stage mass actions intermittently ever since. The two groups joined forces over the weekend in a joint protest to voice discontent with Macron’s government.

At President Trump’s direction, Washington ditched the Paris climate accord in 2017, a multilateral agreement among the majority of the world’s nations dealing with greenhouse gas emissions and other environmental issues. Dismissing it as “draconian,” Trump has repeatedly mocked Macron about the deal since the US withdrawal, once even suggesting the accord itself was responsible for the country’s ongoing unrest.

‘How’s the climate accord doing?’: Trump rips Macron amid massive pension protests & labor strike
Israeli Prime Minister Benjamin Netanyahu has confirmed he will seek parliamentary immunity from prosecution in multiple corruption cases hanging over him ahead of upcoming March elections. In a speech at...
7 Likes

‘How’s the climate accord doing?’: Trump rips Macron amid massive pension protests & labor strike
Thousands of nationalists In Kiev have celebrated the New Year with torchlight parades in honor of Stepan Bandera, a WWII nationalist regarded by modern Ukrainians as a hero and by...
6 Likes

‘How’s the climate accord doing?’: Trump rips Macron amid massive pension protests & labor strike
There was no sense of festive goodwill from Jose Mourinho after he was yellow-carded in Tottenham's loss at Southampton for appearing to read the tactics being jotted down by a...
8 Likes