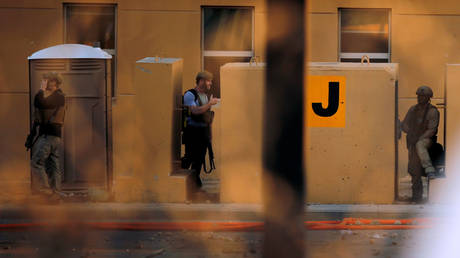 Some 500 paratroopers from the US Army’s 82nd Airborne Division are already on their way to Kuwait, and 3,500 more are set to follow, after the US embassy in Baghdad was stormed and nearly taken by angry Iraqi militiamen.

The initial force has already departed Fort Bragg, North Carolina on board C-17 transports. Alert sequence for the Deployment Ready Brigade (DRB) calls for the full deployment within 96 hours.

Hundreds of members of the Iraqi Shia militia Kataib Hezbollah stormed the US embassy in Baghdad on Tuesday, chanting “Death to America” and setting the entrance checkpoint on fire. They were protesting the US airstrikes that killed 25 of their members over the weekend, in what the Pentagon said was retaliation for last week’s rocket strike at a US base in Kirkuk that killed one contractor.

The militia withdrew after a task force of some 100 US Marines, accompanied by attack helicopters, showed up to reinforce the embassy. US President Donald Trump has blamed Iran for the attack and openly threatened Tehran with a “big price” to pay.

In May 2018, the Trump administration unilaterally repudiated the nuclear deal negotiated with Tehran in 2015, and imposed sanctions intended to destroy the Iranian economy. Despite Trump’s campaign rhetoric about ending US involvement in endless foreign wars, his advisers have repeatedly called for what amounts to regime change in Tehran.

US sending 4,000 troops to Middle East after Baghdad embassy siege – reports
Israeli Prime Minister Benjamin Netanyahu has confirmed he will seek parliamentary immunity from prosecution in multiple corruption cases hanging over him ahead of upcoming March elections. In a speech at...
7 Likes

US sending 4,000 troops to Middle East after Baghdad embassy siege – reports
Thousands of nationalists In Kiev have celebrated the New Year with torchlight parades in honor of Stepan Bandera, a WWII nationalist regarded by modern Ukrainians as a hero and by...
6 Likes

US sending 4,000 troops to Middle East after Baghdad embassy siege – reports
There was no sense of festive goodwill from Jose Mourinho after he was yellow-carded in Tottenham's loss at Southampton for appearing to read the tactics being jotted down by a...
8 Likes