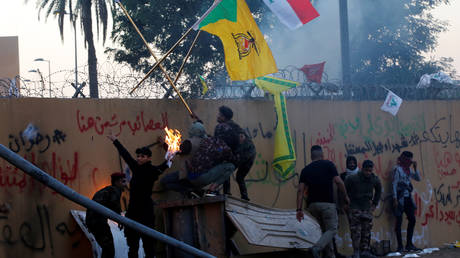 US Secretary of State Mike Pompeo has named the alleged masterminds of the attack on the US embassy in Baghdad, calling them “terrorists” and pinning blame squarely on Tehran for inciting the siege.

Taking to Twitter on Tuesday evening, hours after the US embassy in Baghdad was nearly ransacked by members of the Iraqi Shia militia Kataib Hezbollah, protesting the US airstrike that killed 25 of their own over the weekend, Pompeo posted photos purporting to show the alleged perpetrators of the failed storming attempt.

“The attack today was orchestrated by terrorists – Abu Mahdi al Muhandis and Qays al-Khazali – and abetted by Iranian proxies – Hadi al Amari and Faleh al-Fayyad. All are pictured below outside our embassy,” Pompeo wrote.

The attack today was orchestrated by terrorists – Abu Mahdi al Muhandis and Qays al-Khazali – and abetted by Iranian proxies – Hadi al Amari and Faleh al-Fayyad. All are pictured below outside our embassy. pic.twitter.com/2QfGGrfmDd

The photos accompanying the post show the crowd outside the US embassy on Tuesday, Pompeo claimed, arguing that the four militia leaders were mingling with the protesters.

The top US diplomat did not produce evidence to support the claim that any of the photographed individuals played a role in stirring the unrest itself, which was originally sparked by the US bombing raid and drew outrage from the Iraqi government and citizens alike.

Pompeo then attempted to make a distinction between “the legitimate efforts of the Iraqi protesters” opposing the government in Baghdad and those behind the embassy attack. While the protests against pervasive corruption and the government’s failure to provide better living conditions for Iraqis have rocked the country since October and saw bloody clashes between security forces and demonstrators, Pompeo did not miss a chance to point a finger at Tehran as the main culprit behind Iraq’s internal political woes, arguing that the corruption was “exported there by the Iranian regime.”

Today’s attack against the U.S. Embassy should not be confused with the legitimate efforts of the Iraqi protestors who have been in the streets since October working for the people of Iraq to end the corruption exported there by the Iranian regime.

Tehran has flatly rejected the allegations that it fanned the unrest, slamming Washington’s “audacity” to blame Iran for protests triggered by American airstrikes, which the Pentagon claimed were in retaliation for an attack on a US coalition base near the Iraqi city of Kirkuk.

Iraq’s economy and infrastructure were left in shambles after two decades of intermittent war and sectarian violence following the 2003 US invasion, which also took a heavy toll on the average citizen, leaving many without the most basic services, including access to clean water.

Pompeo blames ‘terrorists & Iranian proxies’ for attack on US embassy in Baghdad as Teheran rebuffs accusations
Israeli Prime Minister Benjamin Netanyahu has confirmed he will seek parliamentary immunity from prosecution in multiple corruption cases hanging over him ahead of upcoming March elections. In a speech at...
7 Likes

Pompeo blames ‘terrorists & Iranian proxies’ for attack on US embassy in Baghdad as Teheran rebuffs accusations
Thousands of nationalists In Kiev have celebrated the New Year with torchlight parades in honor of Stepan Bandera, a WWII nationalist regarded by modern Ukrainians as a hero and by...
6 Likes

Pompeo blames ‘terrorists & Iranian proxies’ for attack on US embassy in Baghdad as Teheran rebuffs accusations
There was no sense of festive goodwill from Jose Mourinho after he was yellow-carded in Tottenham's loss at Southampton for appearing to read the tactics being jotted down by a...
8 Likes