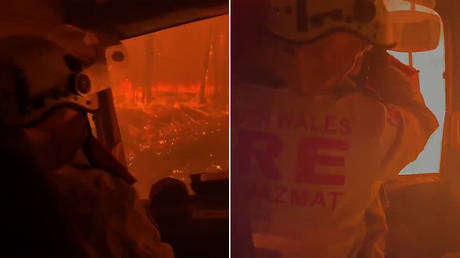 Australia has sent military aircraft and ships to relieve towns that have been caught in the violent infernos sweeping the country’s southeast coast. Thousands of people have been forced to camp on beaches as they await rescue.

Wednesday’s deployment used military helicopters and naval vessels to deliver water, food and fuel to areas that have been completely cut off by the fires in the states of New South Wales (NSW) and Victoria.

An estimated 4,000 people in the Victorian coastal town of Mallacoota fled to the seashore on Tuesday, after winds pushed wildfires toward their homes.

At 3am on 1 January 2020, there are 112 fires burning across NSW. Several large & dangerous fires continue burning on the South Coast where 2 fires remain at emergency warning. A further 6 fires are at Watch and Act. Over 2500 firefighters continue working on these fires. #nswrfs pic.twitter.com/5wgY6UnjOD

The Australian Defence Force is sending navy ships to Mallacoota on a supply mission that is expected to last two weeks, Victoria Emergency Commissioner Andrew Crisp told local media. He said firefighters would be flown into the area via helicopter, since the roads are no longer accessible.

The massive bushfires have destroyed more than four million hectares (10 million acres). High winds and extreme heat have sparked new blazes almost daily. The fires have claimed 12 lives since the beginning of October.

Australian government officials have called for assistance from the US and Canada to help contain the fires.

Australia deploys military aircraft & navy ships to help fire-ravaged communities
Israeli Prime Minister Benjamin Netanyahu has confirmed he will seek parliamentary immunity from prosecution in multiple corruption cases hanging over him ahead of upcoming March elections. In a speech at...
7 Likes

Australia deploys military aircraft & navy ships to help fire-ravaged communities
Thousands of nationalists In Kiev have celebrated the New Year with torchlight parades in honor of Stepan Bandera, a WWII nationalist regarded by modern Ukrainians as a hero and by...
6 Likes

Australia deploys military aircraft & navy ships to help fire-ravaged communities
There was no sense of festive goodwill from Jose Mourinho after he was yellow-carded in Tottenham's loss at Southampton for appearing to read the tactics being jotted down by a...
8 Likes