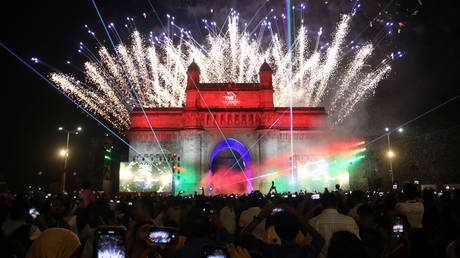 Taking a break from the hard work of soldiering, Indian service members have been filmed sending a flurry of artistic New Year greetings to the nation, garnering applause on social media.

Deployed in the snowy Himalayan ridges of Kashmir, a bunch of soldiers try their best to show off their team spirit. Standing atop a mountain, their squad chanted some slogans before “wishing everybody a happy and a prosperous New Year.”

Their brother-in-arms –serving tours of duty in the same region– staged a more sophisticated performance, singing a patriotic song while also dancing in unison.

♥️🇮🇳⛄️ #HappyNewYear from Indian Army jawans at one of the northern border sectors. pic.twitter.com/H84nOrwXvS

In another video that surfaced on social media, soldiers sing the praises of their country – also greeting the nation with the New Year.

This is the Indian Army! What a beautiful and motivating video! Indian Army jawans singing in praise of our nation India to celebrate New Year!! 🇮🇳 Salute their bravery and commitment. pic.twitter.com/bGr4DIYzqH

The Army’s Northern Command chose to be more serious, uploading footage of troops flanking the national flag of India.

All in all, the service members could chill out somewhat during the New Year’s period, passionately dancing to the authentic beats.

Naturally, the videos were received quite well by Indian twitterati, who thanked them for their selfless service. “Heart goes out to their warm spirit in those punishing cold conditions,” one woman wrote. Other comments were equally appreciative.

This video not only made my day, but also made the first day of New Year. Thank You for sharing it with us Sir.

Dance, chant, sing: WATCH Indian soldiers send army-style New Year greetings
Thousands of nationalists In Kiev have celebrated the New Year with torchlight parades in honor of Stepan Bandera, a WWII nationalist regarded by modern Ukrainians as a hero and by...
6 Likes

Dance, chant, sing: WATCH Indian soldiers send army-style New Year greetings
There was no sense of festive goodwill from Jose Mourinho after he was yellow-carded in Tottenham's loss at Southampton for appearing to read the tactics being jotted down by a...
8 Likes