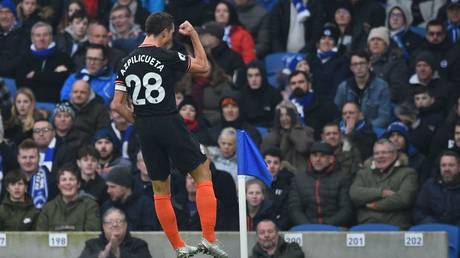 Brighton winger Alireza Jahanbakhsh started 2020 in style as the Iranian scored a stunning overhead kick equalizer for his team in the Premier League encounter with Chelsea.

Jahanbakhsh, 26, came on as a second-half substitute with his team 1-0 down after Chelsea skipper Cesar Azpilicueta’s opener early in the game, but salvaged a point with an acrobatic strike six minutes from time.

The ball was headed to the Iranian 10 yards out after a Brighton corner, with Jahanbakhsh facing away from goal but launching himself upwards and making the cleanest of contact to send the ball past Kepa and into the corner of the net.

What a goal by Jahanbakhsh Brighton vs Chelsea 1-1 #BRICHE chelsea have been awful pic.twitter.com/6Oi2TmRhRV

The athletic effort was Jahanbakhsh’s second goal in two games for Brighton – after he had gone 26 games waiting to find the net for the team he joined from Dutch side AZ Alkmaar for a club record fee of around £17 million in July 2018.

2 – Having failed to score in any of his first 26 appearances for Brighton in all competitions, Alireza Jahanbakhsh has now netted in consecutive appearances for the Seagulls. Acrobat. pic.twitter.com/ybwVBXjYt6

Tears had followed his first goal against Bournemouth in the 2-0 win on December 28, while his second was met with wild celebration at the Amex Stadium as the hosts salvaged a vital point in their bid to edge even further away from the bottom three.

The social media plaudits also poured in for a goal that illuminated the first day of Premier League action in the new decade.

Two in two for the Brighton striker. pic.twitter.com/Id2k8jNSuf

The draw means Frank Lampard’s Chelsea sit fourth on 36 points in the Premier League table, five points ahead of Manchester United, who travel to Arsenal later on New Year’s day.

Graham Potter’s Brighton are 13th on 24 points, five clear of the relegation zone but having played at least one game more than the teams in the bottom three.

Starting the New Year with a BANG: Brighton star Alireza Jahanbakhsh scores incredible overhead kick against Chelsea (VIDEO)
Israeli Prime Minister Benjamin Netanyahu has confirmed he will seek parliamentary immunity from prosecution in multiple corruption cases hanging over him ahead of upcoming March elections. In a speech at...
7 Likes

Starting the New Year with a BANG: Brighton star Alireza Jahanbakhsh scores incredible overhead kick against Chelsea (VIDEO)
Thousands of nationalists In Kiev have celebrated the New Year with torchlight parades in honor of Stepan Bandera, a WWII nationalist regarded by modern Ukrainians as a hero and by...
6 Likes

Starting the New Year with a BANG: Brighton star Alireza Jahanbakhsh scores incredible overhead kick against Chelsea (VIDEO)
There was no sense of festive goodwill from Jose Mourinho after he was yellow-carded in Tottenham's loss at Southampton for appearing to read the tactics being jotted down by a...
8 Likes