Iraqi protesters withdraw from US Embassy in Baghdad, some defy orders (VIDEOS)

Iraqi protesters withdraw from US Embassy in Baghdad, some defy orders (VIDEOS) 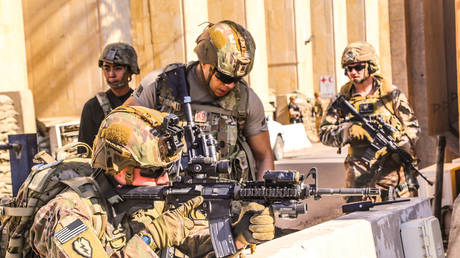 Paramilitary leaders have ordered their supporters to leave the heavily fortified US Embassy compound in Baghdad, Iraq, as American troops reinforced the besieged facility. However, some protesters stayed put.

Live footage from RT’s video agency Ruptly showed protesters with Hezbollah flags withdrawing en masse in their vehicles. It was not immediately clear from the video how many have remained at the scene of clashes, where tear gas and stun grenades were reportedly fired again on Wednesday.

Hordes of protesters descended on Baghdad’s American embassy – located inside the heavily fortified ‘Green Zone’ – on Tuesday. Incensed by Sunday’s US airstrikes against the Kataib Hezbollah militia, the crowd lit fires and pelted the embassy with stones. A contingent of US Marines arrived on Tuesday night to bolster security.

Kataib Hezbollah is an Iranian-backed Shi’ite militia, allied with an umbrella group of similar militias known as the ‘Popular Mobilization Forces’ (PMF), who are supposed to be under the command of the Iraqi military. The PMF on Wednesday told the crowds at the embassy to withdraw, claiming that their “message has been heard,” and to allow the Iraqi government to “preserve the prestige of the state.”

However, the call to pull back has been ignored by a number of the protesters. While some reportedly stood down, a faction of hardliners remained behind.

Washington has blamed Iran for orchestrating the embassy riots, and for directing militias like Kataib Hezbollah to attack its forces in Iraq. Tehran denies all responsibility, with Iranian Supreme Leader Ayatollah Ali Khamenei telling Trump that “your crimes in Iraq, Afghanistan… have made nations hate you.”

With the embassy showdown turning into another proxy battle between Iran and the US, Iraqi Prime Minister Adel Abdul Mahdi has sought to balance relations with both sides. The PM called the US airstrikes a “vicious assault that will have dangerous consequences,” but warned protesters against any aggression towards foreign embassies.

Iraqi protesters withdraw from US Embassy in Baghdad, some defy orders (VIDEOS)
Israeli Prime Minister Benjamin Netanyahu has confirmed he will seek parliamentary immunity from prosecution in multiple corruption cases hanging over him ahead of upcoming March elections. In a speech at...
7 Likes

Iraqi protesters withdraw from US Embassy in Baghdad, some defy orders (VIDEOS)
Thousands of nationalists In Kiev have celebrated the New Year with torchlight parades in honor of Stepan Bandera, a WWII nationalist regarded by modern Ukrainians as a hero and by...
6 Likes

Iraqi protesters withdraw from US Embassy in Baghdad, some defy orders (VIDEOS)
There was no sense of festive goodwill from Jose Mourinho after he was yellow-carded in Tottenham's loss at Southampton for appearing to read the tactics being jotted down by a...
8 Likes