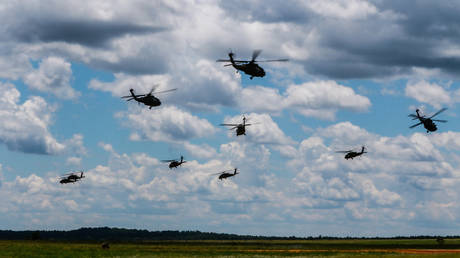 A major partisan divide has formed around President Trump’s handling of the situation in Iraq, with several Democrats blasting recent US airstrikes and troop deployments, and some in the GOP lining up to voice support.

Massachusetts Senator and Democratic 2020 hopeful Elizabeth Warren on Tuesday took aim at the president for a US bombing raid ordered on an Iraqi militia over the weekend. American officials accused the group – Kataib Hezbollah – of carrying out a rocket attack on a US base with Iranian backing, which killed one American contractor, though they have yet to offer any evidence for the claims of responsibility.

“Trump’s reckless decisions to walk away from the Iran deal and now to launch airstrikes in Iraq without Iraqi government consent have brought us closer to war and endangered US troops and diplomats,” Warren said in a statement online.

We should end the forever wars, not start new ones.

The US air raid left 25 Iraqi fighters dead and prompted a heated demonstration at the US Embassy in Baghdad on Tuesday afternoon, in which militiamen and ordinary citizens breached the front gate of the embassy complex, smashing windows and scrawling anti-American slogans on its walls.

Senator Tom Udall (D-NM) – who sponsored a bi-partisan bill with Kentucky Republican Rand Paul to prevent an “unauthorized war” with the Islamic Republic earlier this year – also weighed in to slam Trump’s response to the unrest, which included the deployment of a Marine task force and attack helicopters to defend the embassy.

“At a volatile time, the Trump administration’s reckless escalation and miscalculation are endangering US citizens & pushing us closer to unauthorized war in the Middle East,” Udall wrote in a tweet, adding “Congress needs to step in and stop it.”

At a volatile time, the Trump administration’s reckless escalation and miscalculation are endangering U.S. citizens & pushing us closer to unauthorized war in the Middle East. Congress needs to step in and stop it. https://t.co/JujQRbMSo6

Democratic presidential candidate and Southbend, Indiana Mayor Pete Buttigieg joined his fellow lawmakers on Twitter to attack the president for “mood swings” and making “policy by tweet,” arguing his actions in Iraq only served to put US “national interests in harm’s way.” Far from the most dovish Democrat vying for the 2020 nomination, however, Buttigieg accepted that the policies were a response to “Iranian aggression,” despite disagreeing with them.

Escalated tensions across the Middle East now put our diplomats, military, and ultimately our national interests in harm’s way.

Across the aisle, some Republicans were far more supportive, fully endorsing the commander-in-chief’s recent moves. Senator Marco Rubio (R-FL) credited Trump with “very solid work” and hailed the Marine deployment as a “decisive action” needed “in a time of crisis,” insisting there was “zero question” about who was behind the rocket attack on the US base.

.@realDonaldTrump deserves credit for responding decisively to the Iran proxy attack of our embassy in Iraq. Very solid work.

One of Trump’s biggest boosters as of late, Senator Lindsey Graham (R-SC), also lavished praise on the president after a meeting to discuss the tense situation in Iraq, accusing Iran of threatening “American interests” and warning that they do so at their own risk. Comparing the embassy siege to a lethal attack on a US diplomatic facility in Libya in 2012, Graham urged for “no more Benghazis.”

As to Iran: They continue to threaten American interests at their own peril.

In the latest US response, the Pentagon announced a deployment of some 750 paratroopers to neighboring Kuwait on Tuesday evening, which Defense Secretary Mark Esper said could be mobilized in days to “protect our people and interests.” Though few lawmakers have yet weighed in on the new deployment, the battle lines in Washington appear to already be drawn.

'Reckless escalation' or 'no more Benghazis'? Dems jeer & GOP cheer as Trump points finger at Teheran after Baghdad embassy attack
Israeli Prime Minister Benjamin Netanyahu has confirmed he will seek parliamentary immunity from prosecution in multiple corruption cases hanging over him ahead of upcoming March elections. In a speech at...
7 Likes

'Reckless escalation' or 'no more Benghazis'? Dems jeer & GOP cheer as Trump points finger at Teheran after Baghdad embassy attack
Thousands of nationalists In Kiev have celebrated the New Year with torchlight parades in honor of Stepan Bandera, a WWII nationalist regarded by modern Ukrainians as a hero and by...
6 Likes

'Reckless escalation' or 'no more Benghazis'? Dems jeer & GOP cheer as Trump points finger at Teheran after Baghdad embassy attack
There was no sense of festive goodwill from Jose Mourinho after he was yellow-carded in Tottenham's loss at Southampton for appearing to read the tactics being jotted down by a...
8 Likes