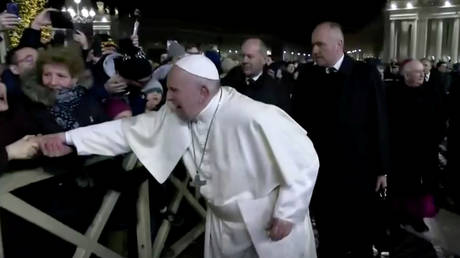 The world saw a different side of Pope Francis on New Year’s Eve after the pontiff tore himself free from a woman who had grabbed his hand and pulled him toward her.

A woman seeking the Pope’s blessing on New Year’s Eve instead ended up enraging the pontiff after grabbing his arm to get his attention. A video of the altercation shows Francis walking through Vatican City as he greeted pilgrims. After reaching out to touch a child, a nearby woman seized his hand, jerking the religious leader around – a yank that appeared to cause him pain.

This evening after visiting the Nativity scene in St. Peter’s Square, Pope Francis loses his cool after being grabbed by a pilgrim who wouldn’t let go of his hand. The Pope repeated slapped her hand and told her to let go of him. pic.twitter.com/6Qrgh8aZKz

After slapping her hand several times, the Pope freed himself of her grip. The usually serene Francis scowled as he walked away.

Francis has a history of repelling unwanted contact. In March, he was criticized for refusing to allow members of the faithful to kiss his papal ring during a visit to an Italian shrine.

Read more here:: Pope Francis repeatedly SLAPS woman’s hand after she YANKS him toward her (VIDEO)

Pope Francis repeatedly SLAPS woman’s hand after she YANKS him toward her (VIDEO)
Israeli Prime Minister Benjamin Netanyahu has confirmed he will seek parliamentary immunity from prosecution in multiple corruption cases hanging over him ahead of upcoming March elections. In a speech at...
7 Likes

Pope Francis repeatedly SLAPS woman’s hand after she YANKS him toward her (VIDEO)
Thousands of nationalists In Kiev have celebrated the New Year with torchlight parades in honor of Stepan Bandera, a WWII nationalist regarded by modern Ukrainians as a hero and by...
6 Likes

Pope Francis repeatedly SLAPS woman’s hand after she YANKS him toward her (VIDEO)
There was no sense of festive goodwill from Jose Mourinho after he was yellow-carded in Tottenham's loss at Southampton for appearing to read the tactics being jotted down by a...
8 Likes