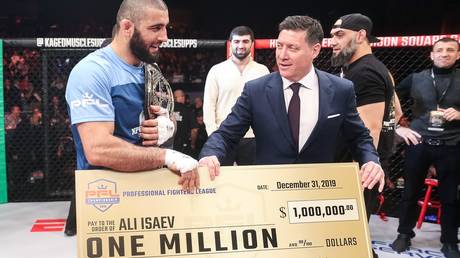 Kayla Harrison, the two-time Olympic medalist in judo who’s described herself as a “female Khabib Nurmagomedov,” is $1 million richer after winning the PFL lightweight tournament late on New Year’s Eve.

Harrison was one of six millionaires crowned by the PFL at their year-end event in Madison Square Garden, with the undefeated judoka topping the bill and making light work of Brazilian fighter Pacheco to enhance her reputation as one of the most dominant female fighters in the world.

Her suffocating style of ground attack has been compared to that of UFC champion Khabib Nurmagomedov and if there are differences in their output their style of attack, the results are equally effective.

HISTORY MADE! @KaylaH heads into 2020 a millionaire and the 2019 PFL Women’s Lightweight Champion! #PFLChampionship pic.twitter.com/OllX4dELW1

Airborn! Courtesy of @KaylaH in round 4. The final round of the decade is coming up on ESPN2. #PFLChampionship pic.twitter.com/35U7g5GqAz

This was Harrison’s second win against Pacheco during the PFL’s tournament structure, having already bested her during the ‘regular season’ but this time around, and perhaps with the thought of the $1 million cash prize motivating her, she was even more dominant.

She utilized her world-class grappling acumen to take the fight to the canvas in a number of different ways, forcing Pacheco to fight on the back foot throughout the majority of the bout. The Brazilian did find occasional success on the feet and threatened with submissions from the bottom, but she appeared outgunned throughout.

After five rounds and 25 minutes, there was no doubt about who had won the fight. For a moment, the cash prize and title belt seemed secondary to the man who awarded them to her – Mike Tyson – but make no mistake, Kayla Harrison has announced herself as a world class mixed martial artist.

Elsewhere on the card which featured an incredible six world title fights (all with $1 million on the line), Ray Copper III won the welterweight tournament while Ali Isayev beat former UFC fighter Jared Rosholt to win the heavyweight tournament.

Million-dollar woman: Kayla Harrison - dubbed 'the female Khabib' - wins PFL Championship & mega payday (VIDEO)
Thousands of nationalists In Kiev have celebrated the New Year with torchlight parades in honor of Stepan Bandera, a WWII nationalist regarded by modern Ukrainians as a hero and by...
6 Likes

Million-dollar woman: Kayla Harrison - dubbed 'the female Khabib' - wins PFL Championship & mega payday (VIDEO)
There was no sense of festive goodwill from Jose Mourinho after he was yellow-carded in Tottenham's loss at Southampton for appearing to read the tactics being jotted down by a...
8 Likes