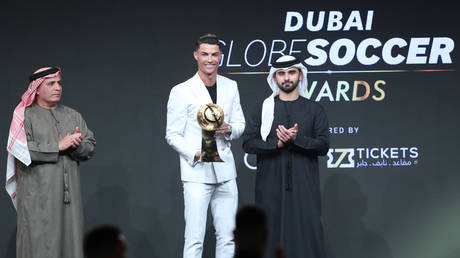 Juventus are considering offering Cristiano Ronaldo a contract extension which could keep the Portuguese ace at the club until the age of 38, according to reports in Italy.

But according to Italian outlet Corriere dello Sport, Ronaldo and Juventus have both shown interest in extending that deal, potentially until 2023 when the star forward would be 38.

Ronaldo and agent Jorge Mendes are reported to have discussed the forward’s future on a recent trip to the Emirates, where the Juve and Portugal ace picked up the player of the year accolade at the Dubai Globe Soccer Awards.

It’s believed that the player and the Juve hierarchy, specifically director Fabio Paratici, would be interested in extending their cooperation, which currently sees Ronaldo pocket a reported €31 million ($34 million) annually, making him by some distance the club’s – and Italy’s – best-paid player.

Despite the potential riches of a move to the Middle East or Far East in the final days of his career, Ronaldo could still pursue that option from the age of 38 onwards, especially given his renowened dedication to keeping himself in top shape.

Both Juve and Ronaldo would, however, take into account the state of play in a few months and see where Juventus stand in Serie A – where they are facing a tough challenge from Inter Milan – and the Champions League, where they meet French outfit Lyon in the last 16.

The Bianconeri currently find themselves in second place in the league, behind Inter on goal difference.

But while they bid to win a ninth consecutive Scudetto, perhaps the biggest prize they have their eyes on is the Champions League, where they have gone more than two decades without success.

Ronaldo is a serial winner in the competition, having won it five times and being its all-time top scorer, and despite his advancing age the number 7 has shown no diminishment in his hunger for success.

Juve have seen a season of changes after new manager Maurizio Sarri came in to replace Massimiliano Allegri.

There have been signs of frustration, specifically when Ronaldo was substituted in consecutive games in November amid talk of a rift with Sarri, but which was explained as being due to a nagging knee injury.

Ronaldo has hit 12 goals in 21 games in all competition for the Turin giants this season.

In addition to his contribution on the pitch, his commercial value to Juve is perhaps even more undeniable, given his mammoth social media following and massive marketing appeal as one of sport’s biggest icons.

He would be a man in demand whatever his age, but he could now find himself at Juventus beyond what was originally planned.

Keep Ron going! Juventus considering new deal to keep Cristiano Ronaldo at club until age of 38 – reports
Israeli Prime Minister Benjamin Netanyahu has confirmed he will seek parliamentary immunity from prosecution in multiple corruption cases hanging over him ahead of upcoming March elections. In a speech at...
7 Likes

Keep Ron going! Juventus considering new deal to keep Cristiano Ronaldo at club until age of 38 – reports
Thousands of nationalists In Kiev have celebrated the New Year with torchlight parades in honor of Stepan Bandera, a WWII nationalist regarded by modern Ukrainians as a hero and by...
6 Likes

Keep Ron going! Juventus considering new deal to keep Cristiano Ronaldo at club until age of 38 – reports
There was no sense of festive goodwill from Jose Mourinho after he was yellow-carded in Tottenham's loss at Southampton for appearing to read the tactics being jotted down by a...
8 Likes