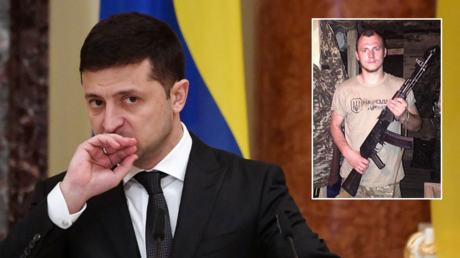 The political struggle in Ukraine never goes on holiday. The viewers of two local channels couldn’t tell if it was 2019 all over again when they saw former president Petro Poroshenko delivering the traditional New Year address.

Puzzled viewers of Ukraine’s 5 Kanal and Pryamiy channel discovered that the two seemingly preferred Poroshenko to the actual President Volodymyr Zelensky on the New Year’s Eve. The man was given airtime right before midnight, when the whole country gathered in front of their TVs with champagne-filled glasses.

But was it an epic fail or an epic provocation? The latter seems to be the case as Poroshenko, who is a major oligarch in Ukraine with a successful confectionery business and other assets, is the official owner of 5 Kanal. The 54-year-old is also linked to Pryamiy, although he denies getting involved with the broadcaster’s editorial policies.

In his address, Zelensky’s beaten rival praised his past achievements during own time in office, saying, among other things, that it allowed to create “a large margin of safety” for the impulse for change in Ukraine, which will now be very hard to stagger.

Poroshenko was destroyed by comedian-turned-politician Zelensky in the presidential election in April 2019, being only able to claim 24.5 percent of the vote in the second round. But despite the painful loss, he hasn’t quit politics, taking reigns at the European Solidarity Party in hopes of returning to power.

It turns out the two channels didn’t drop Zelensky’s address completely. They showed it to their audiences after midnight, leaving them with two speeches and a feeling of déjà vu.

Ironically, Poroshenko’s move seems to be a tit-for-tat response to his political rival, as Zelensky got away with a similar stunt in December 2018. Back then, 1+1 channel of oligarch Igor Kolomoysky broadcasted Zelensky’s New Year address instead of the one by Poroshenko. In that clip, the comedian announced that he was joining the presidential race.

It’s the wrong guy! Two Ukrainian channels air oligarch Poroshenko’s NYE address instead of president Zelensky’s
Israeli Prime Minister Benjamin Netanyahu has confirmed he will seek parliamentary immunity from prosecution in multiple corruption cases hanging over him ahead of upcoming March elections. In a speech at...
7 Likes

It’s the wrong guy! Two Ukrainian channels air oligarch Poroshenko’s NYE address instead of president Zelensky’s
Thousands of nationalists In Kiev have celebrated the New Year with torchlight parades in honor of Stepan Bandera, a WWII nationalist regarded by modern Ukrainians as a hero and by...
6 Likes

It’s the wrong guy! Two Ukrainian channels air oligarch Poroshenko’s NYE address instead of president Zelensky’s
There was no sense of festive goodwill from Jose Mourinho after he was yellow-carded in Tottenham's loss at Southampton for appearing to read the tactics being jotted down by a...
8 Likes