Is the shale boom running on fumes?

Is the shale boom running on fumes? 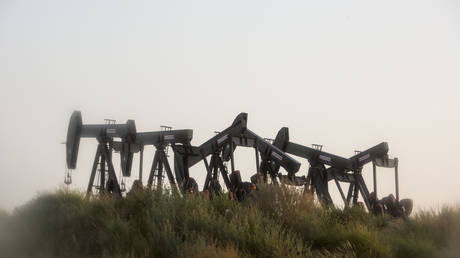 Shale drilling does not produce as much oil and gas as the industry promised, raising questions about the productivity, profitability and, ultimately, the longevity of the fracking boom.

The Wall Street Journal published a damning investigation into the productivity of thousands of shale wells, finding that as time has passed, oil and gas production from shale wells has proved to be more disappointing than previously thought. The report adds more evidence to the conclusion that the WSJ came to nearly a year ago, which raised serious questions about problems endemic to shale drilling.

After an initial burst of production, shale wells decline rapidly, a fact that has been widely known since the fracking boom began more than a decade ago. However, companies promised that these wells would stay online for years, perhaps even decades, even though they would produce at a small fraction of their initial peak.

But as time has passed, wells drilled years ago are now producing a lot less than previously thought. The WSJ collected data on the 29 largest shale producers. A year ago, the WSJ found that wells produced from those companies were on track to extract 10 percent less oil and gas over their lifespans than the companies promised. Now, with new data, the WSJ finds that those wells could produce 15 percent less than initially advertised.

That adds up to a gap of around 1.4 billion barrels of oil and gas over 30 years, the WSJ says, or around $60 billion at current prices. Put another way, the 29 largest shale companies are set to produce $60 billion less value than they initially told investors.

The WSJ pointed to the example of Whiting Petroleum, which told investors that each of its wells drilled in North Dakota in 2015 would produce a cumulative 700,000 barrels of oil and gas over their full lifetimes. In early 2019, using data from Rystad, the WSJ found that the real figure might be more like 590,000 barrels. As 2019 comes to a close, the WSJ found that the most up-to-date data now pegs that estimate at 540,000 barrels. In other words, Whiting’s wells are on track to produce nearly a quarter less than previously thought.

There are some serious implications from this revelation. Shale companies may not be as valuable as investors previously thought. Shale drilling in general may be less profitable than previously thought, and it has long been dogged by a questionable business model. Moreover, to keep output from falling, companies will have to spend more and drill at a faster rate. In the end, the US may not produce as much oil and gas as expected.

Critics of the shale industry have raised similar concerns in the past. For instance, the Post Carbon Institute has repeatedly published reports questioning the longevity of the shale boom. The latest analysis came in November, in which author J. David Hughes said the EIA’s reference case for US.oil and gas production from each shale basin through 2050 is “extremely optimistic for the most part, and therefore highly unlikely to be realized.”

As Hughes notes, the industry’s tendency to “high grade” its assets – or, to focus on its best acreage – allows for faster extraction but ultimately does produce more oil and gas. Also, the sweet spots get drilled, and E&Ps shift to lower quality acreage, which is already happening. Meanwhile, child wells produce a lot less than the parent wells, and with the bulk of new wells expected to be child wells, production on a per-well basis could decline.

Over the years, oil executives have repeatedly pointed to various innovations that will pave the way to better performances and juicy profits – re-fracking, super laterals, cube development, supercomputers, etc. There was also a corresponding set of financial “innovations,” as the industry found creative ways to convince investors to fork over more capital.

In the end, the overarching problem is that shale drilling is plagued by steep decline rates and the inability to generate positive cash flow, at least at its current size. The latest WSJ report finds that the decline rate may be steeper than previously thought.

The upshot is that the shale boom could be on borrowed time. As Hughes wrote in his November report for the Post Carbon Institute, while “the ‘shale revolution’ has provided a reprieve from what just 15 years ago was thought to be a terminal decline in oil and gas production in the US, this reprieve is temporary, and the US would be well advised to plan for much-reduced shale oil and gas production in the long term.”

This article was originally published on Oilprice.com

Read more here:: Is the shale boom running on fumes?

Is the shale boom running on fumes?
Israeli Prime Minister Benjamin Netanyahu has confirmed he will seek parliamentary immunity from prosecution in multiple corruption cases hanging over him ahead of upcoming March elections. In a speech at...
7 Likes

Is the shale boom running on fumes?
Thousands of nationalists In Kiev have celebrated the New Year with torchlight parades in honor of Stepan Bandera, a WWII nationalist regarded by modern Ukrainians as a hero and by...
6 Likes

Is the shale boom running on fumes?
There was no sense of festive goodwill from Jose Mourinho after he was yellow-carded in Tottenham's loss at Southampton for appearing to read the tactics being jotted down by a...
8 Likes