Can hitting the reset button save the Cleveland Browns from cementing their status as the NFL’s most doomed franchise?

Can hitting the reset button save the Cleveland Browns from cementing their status as the NFL's most doomed franchise? 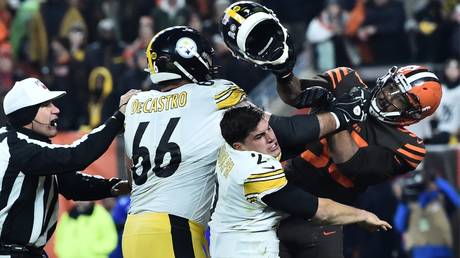 The Cleveland Browns entered the 2019 season as the most hyped team in the NFL. Ten losses later, they have fired their head coach, their GM and are mired by rumors of internal strife. How did it go so far off the rails in Ohio?

Long before the first snap of the current NFL season, some oddsmakers cherry-picked the perennially underachieving Browns as the fifth favorites to win Super Bowl LIV in February. This lofty assessment was borne on the back of signs of life in the second half of last season, mostly authored by NFL draft first pick Baker Mayfield.

The pick was considered a dangerous one but John Dorsey, the General Manager who was fired on New Year’s Eve, backed the Oklahoma quarterback to the hilt. He was ultimately rewarded with one of finest rookie quarterback seasons in recent years, as Mayfield set the record for the most touchdown completions by a first-year pro in NFL history.

Further offensive weapons and defensive reinforcements were also added in the last year, along with the high-profile trade to acquire superstar receiver Odell Beckham Jr. which was supposed to take the Browns to the fabled next level (or at least the playoffs).

But as their season petered out with a humiliating loss at AFC North rivals the Cincinnati Bengals, it was clear that expectations of a successful season were entirely misguided.

Far from being in the Super Bowl conversation, they instead looked every inch the same team which has put together just two winning seasons this century.

The loss, and the season as a whole, cost head coach Freddie Kitchens his job just hours after the Bengals defeat. Dorsey – the man who drafted Patrick Mahomes – followed him out the door on Tuesday, as the team’s owners Jimmy and Dee Haslam painted a picture of the two parties meeting at a crossroads and opting for different directions.

For what seems like the umpteenth time, the hard reset button has been pressed in Cleveland. What happens next is anyone’s guess, but the reactions of the team’s leaders – Mayfield, Beckham, Jarvis Landry, Nick Chubb – is a factor which cannot be overlooked. Dorsey was widely considered to be one of the true bright spots within the Browns organization and is known for supreme talent evaluation skills. How exactly will the Browns’ star names react to the departure of the man responsible for bringing them to the fold?

The team’s flaws are obvious and therefore, presumably, fixable. The offensive line is porous, Mayfield needs further time to learn how to adequately read an NFL defense, discipline needs to improve. John Dorsey is one of the league’s better minds in learning how to address these issues, though his decision to hire Kitchens in advance of this season seems to have sealed his fate – and it was a very public execution.

The Haslams have a reputation for being reactionary owners. The repeated regime changes in the Browns front office and coaching staff has seen to that, but they have yet to show any real nous when it comes to building a foundation. Dorsey, and to some extent Kitchens, were meant to be those building blocks.

Instead? Back to square one.

Josh McDaniels, the offensive coordinator at the New England Patriots (and Bill Belichick’s right-hand man) is expected to be installed as the new head coach once the Patriots’ playoff run ends and rumor has it that he will be given full Belichick-like control of the franchise, in that he gets to select the groceries AND pick the menu.

And so it goes. An inexperienced coach, whose reputation glows thanks to six Super Bowls alongside Belichick, will be tasked with overseeing the renaissance of a team who appeared culturally incapable of sustaining success.

Football has always been a ‘what have you done for me lately?’ type of sport. This season’s woes will be banished to the past if McDaniels proves a success next year (assuming he moves), but amid all of the uncertainty which hovers over this team like a specter, just one thing remains certain: this team will not be fifth favorites for the Super Bowl next year.

Read more here:: Can hitting the reset button save the Cleveland Browns from cementing their status as the NFL’s most doomed franchise?

Can hitting the reset button save the Cleveland Browns from cementing their status as the NFL's most doomed franchise?
Israeli Prime Minister Benjamin Netanyahu has confirmed he will seek parliamentary immunity from prosecution in multiple corruption cases hanging over him ahead of upcoming March elections. In a speech at...
7 Likes

Can hitting the reset button save the Cleveland Browns from cementing their status as the NFL's most doomed franchise?
Thousands of nationalists In Kiev have celebrated the New Year with torchlight parades in honor of Stepan Bandera, a WWII nationalist regarded by modern Ukrainians as a hero and by...
6 Likes

Can hitting the reset button save the Cleveland Browns from cementing their status as the NFL's most doomed franchise?
There was no sense of festive goodwill from Jose Mourinho after he was yellow-carded in Tottenham's loss at Southampton for appearing to read the tactics being jotted down by a...
8 Likes