Tony Blair and the Blairites: The neoliberal tribute band who still have the Labour Party dancing to their tune

Tony Blair and the Blairites: The neoliberal tribute band who still have the Labour Party dancing to their tune 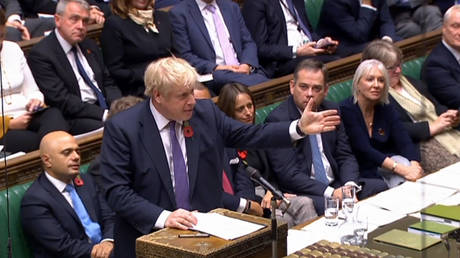 By failing to move against Tony Blair and his disciples in the Labour Party, Jeremy Corbyn has become their prisoner. He is now basically the leader in name only, as the party’s recent Brexit/general election U-turns show.

Question: Who is the current leader of the Labour Party? Well, if you answer ‘Jeremy Corbyn,’ you’d be technically correct, but that’s as far as it goes. The man who is really calling the shots is Tony Blair, despite stepping down as party leader, and prime minister, 12 years ago. The truth is that Corbyn is now no more than a figurehead, reduced to echoing Blair’s own utterances.

Back in 2015, Labour supporters had valid grounds for believing that things were really going to change. During his successful campaign to become Labour leader that year, the 100-1 shot Jeremy Corbyn, a veteran anti-war leftist, said he was convinced that the Iraq War was illegal and that Tony Blair, if he had committed a war crime, should be put on trial. Labour members, desperate for a clean break with Blairism and all it represented, took great heart that they were getting their party back. Corbyn was still prepared to call for an investigation into Blair as late as May 2016. But since then, it’s all gone very quiet on the anti-war front.

When, in November 2016, the SNP’s Alex Salmond tabled a motion calling for Blair to be held to account for allegedly misleading parliament over the Iraq War, it was defeated by 439 votes to 70. Jeremy Corbyn, the one-time chair of Stop the War, didn’t turn up. The reason given was that he had a ‘longstanding engagement in his constituency.’ The Guardian noted that several of Corbyn’s “key allies” including Diane Abbott and John McDonnell didn’t show up either. The message to Blair and the Blairites was clear: ‘We’re not going to pursue you on this one. It’s over.’

Instead of moving against Blair and his acolytes in the Parliamentary Labour Party (PLP), Corbyn and his ‘key allies’ backed off and sought to accommodate them in the interests of ‘party unity.’ Members who voted overwhelmingly for Corbyn in two leadership elections no doubt hoped that his victories would mark an end to establishment-friendly Blairism. In fact, Blair and the Blairites have regrouped and now have Corbyn exactly where they want him. Which is in a terribly weak position. Corbyn is in a box, but as someone on Twitter said yesterday, he’s been handing his enemies the hammer and the nails.

A key turning point was Corbyn’s failure to act swiftly and decisively against his enemies following the 2017 general election. That election was supposed to mark the end of Corbynism, but the party did extremely well, recording its highest increase in the share of the popular vote since 1945.

The Blairites, who had done so much to undermine Corbyn from 2015, knew they were in a weak position the morning after the night before, so urged ‘party unity’ on the grounds that a new general election was “just around the corner.” Corbyn fell for it, showing remarkable clemency when he should have been ruthless. The idea of mandatory reselections was dropped and in its place came ‘trigger ballots’ which have actually helped to maintain the status quo.

As Sienna Rodgers noted in the Guardian, “the reality is that, far from facilitating a Corbynite takeover, the trigger-ballot battles taking place across the country have allowed the Labour leader’s critics to come out largely unscathed and better organized than ever.”

Instead of Blairites being purged, it’s been left-wing supporters of Jeremy Corbyn like Chris Williamson who have been purged, and Corbyn has done little or nothing to help them. In fact, left-wingers have had a more stressful time at the hands of the Kafkaesque party disciplinary machinery under Corbyn’s leadership than they had under Blair and Brown!

In 2017, one of the reasons why Labour did so well was their pledge to respect the 2016 EU Referendum results. Labour managed to hold on to key pro-Leave seats in the North and Midlands and even make 28 gains from the Tories. But the Blairites were determined to get the party to shift to a more pro-EU position and they have succeeded, with the People’s Vote campaign playing a key role.

In 2017, John McDonnell quite rightly slammed Tony Blair’s criticism of Labour’s Brexit policy. Stressing that the result of the referendum had to be respected, the shadow chancellor said “To be frank, Mr Blair hasn’t really listened to the nature of the debate that is going on in the pubs, the clubs and school gates.”

Yet two years on, McDonnell and Corbyn are literally echoing Blair’s line.

Take the party’s opposition to an early general election. For over two years, the line was ‘Bring it on, we want an election now.’ Then, on September 1, Guru Tony spoke, and since then Labour – to the increasing frustration of its members – has blocked an election three times.

The Leader of the Labour Party. https://t.co/Tixnc2wyFm

Today, we learn that Labour will now back a December election (having voted against it only yesterday), but only after the SNP and Liberal Democrats said they would vote for it, meaning it would have gone through anyway. Yet, Blairite opposition to a December poll continues.

The U-turns of the Labour leadership have been spectacular. In September 2016, John McDonnell received loud applause from the BBC Question Time audience when he told Alastair Campbell, Blair’s former communications chief, that he was the “person above all else, who actually created a political environment where no one believed a word a politician said.” Yet in October 2019, McDonnell, in a very friendly interview with Campbell, said he did not support his interlocutor’s expulsion from the party. Campbell, like Blair, has been pushing for a second referendum – with Remain as an option – to come before any general election.

Labour’s shift to a ‘Remain in all but name’ position has, quite predictably, seen it plummet in the polls.

Adopting a Brexit-blocking/delaying stance makes no sense electorally, given that most of the key marginals the party must win in England and Wales to achieve victory are Tory-held, pro-Leave ones.

It’s hard to escape the conclusion that in urging such a suicidal course of action on him, the Blairites want Corbyn to fail, so that any subsequent election defeat can be blamed on ‘the left,’ whereas in fact it was the left trying to appease and accommodate pro-EU Blairites which is largely behind Labour’s abysmal poll ratings.

Looking at the wider picture, what’s happened to Jeremy Corbyn should make socialists very sceptical of the notion that real, meaningful change can be achieved through the parliamentary system alone in an era of neoliberal globalization. As Labour activist Josh Jackson tweeted yesterday: “A major problem of the left in Britain is that we don’t have leadership outside of parliament.”

A major problem of the Left in Britain is we don’t have leadership outside of parliament. All of our leaders are rooted in parliamentarianism as opposed to having genuine popular power among the working class. Thus our fortune is dependent on parliamentary games and not workers.

To keep Corbyn and McDonnell honest, there needed to be extra-parliamentary pressure on them from a UK Gilets-Jaunes-style movement.

But instead, all the pressure has come from the faux-left and the right.

Faced with the choice of upsetting socialists, or upsetting their opponents, the Labour leadership has chosen to upset socialists – perhaps in the belief that they’ll still vote for the party anyway. Thus Labour will go into the next election with the uber-Blairite Dame Margaret Hodge, the most vehement critic of Corbyn, as a parliamentary candidate, but not the re-suspended Chris Williamson, Corbyn’s most loyal supporter – and just about the only MP to have spoken up for Julian Assange.

First @jeremycorbyn you betrayed me. Then Ken, Marc, Jackie and @DerbyChrisW and thousands of others. You preferred the company of those whose dearest wish and whose every waking hour was dedicated to destroying you. You have made your bed and now you must lie in it. #Vaz #Hodge

The truth is that even if Corbyn were to defy the polls once again and lead Labour to an against-the-odds election ‘victory’ in December (if an election then is confirmed), the pro-status-quo PLP would either prevent him becoming PM or else act as a brake on anything too radical being enacted.

At the moment, it’s looking like game, set and match to Tony Blair, the Labour leader who never really went away. We shouldn’t be too surprised at the way things have turned out. At Oxford in the 1970s, Blair co-founded a band called Ugly Rumours, for whom he sang and played guitar. So you could say he’s got rather used to people dancing to his tune.

Read more here:: Tony Blair and the Blairites: The neoliberal tribute band who still have the Labour Party dancing to their tune

Tony Blair and the Blairites: The neoliberal tribute band who still have the Labour Party dancing to their tune
Former Boston Red Sox designated hitter David Ortiz is cleaning house, and you might be surprised by what he's selling. The man known to Red Sox fans as Big Papi...
Likes

Tony Blair and the Blairites: The neoliberal tribute band who still have the Labour Party dancing to their tune
Britain has scored a massive own goal over the short-sighted decision this week by the Court of Appeal to block a third runway at Heathrow Airport just as we enter...
Likes

Tony Blair and the Blairites: The neoliberal tribute band who still have the Labour Party dancing to their tune
U.S. long-term mortgage rates declined this week as growing concern over the economic impact of China's viral outbreak spurred a steep downturn in global stock markets. Mortgage buyer Freddie Mac...
Likes