How the ‘Right’ has won: Liberals need a new go-to insult for disruptors

How the 'Right' has won: Liberals need a new go-to insult for disruptors 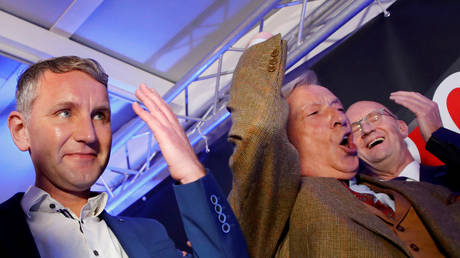 Last weekend’s electoral successes in Italy and Germany have given populist parties just the boost they needed, while the MSM and others struggle to come to terms with new kids on the block.

There has been a subtle shift in the way that European election results are reported over the last year or so.

Once, the liberal insult of ‘Populist’ explained everything. It explained why people were anti-European Union and the single currency; it explained why there were concerns about immigration from the East and Africa and it was loaded with meaning about education, ethnicity and cultural practices. It explained a lot.

Then there was a populist revolt. Intelligent, educated, diverse and widespread populists started to kick up about being pigeonholed with all the nasty things. With bad left stuff, with bad right stuff and just with downright bad.

So now the liberals have decided that those things they don’t like, those tricky election results they find hard to explain or process, will no longer be simply branded ‘populist,’ because that no longer works in explaining away some voting behavior that is, to them, aberrant. People have realized that some populists are actually nice people. Hell, they themselves might even be a populist!

It’s official. From here on in we will call all those who disagree with us ‘Right Wing’. So there.

When Alternative for Deutschland (AfD) doubled their vote in last weekend’s Thuringia state election, beating Angela Merkel (forget what they say, she is still the Leader) and her Christian Democrats, confirming their role as THE German Opposition, the liberals and their cosy media buddies were straight out of the blocks denouncing this ‘right wing’ revolution.

Sure, the state leader Björn Höcke (of AfD) could use an intensive weekend of media training and lessons in what not to say, but it’s only because he is outspoken that the media is jumping on his every ill-considered word.

There are plenty of Damen und Herren not denouncing the Holocaust who still support AfD and its contemporary view of what Germany is doing wrong or right. Why can’t liberals and their media friends just be at ease with that, instead of flagging up its frequent successes as a need for hand-wringing and long, sad faces?

And then, just a little south and a touch to the right on any map, we saw the Italian region of Umbria, smack bang in the centre of Italy, fall to charismatic Matteo Salvini’s La Liga coalition after 50 years of left-wing rule.

Now, call me stubborn but, if, after five full decades, my loving wife finally said, “Look, I’ve had enough. It’s been promise after promise for fifty friggin’ years, you’ve still not fixed the dripping tap in the kitchen and I’m no better off than I was before, when I had plenty of suitors. I fancy a change, I’m off,” then even I, heartbroken as I would be, might see her point.

But no, in Italy, it’s a cause for liberal gnashing of teeth and tearing of hair. I bet La Liga’s former political allies, the Five Star Movement, are distraught.

They had ditched Salvini and his crowd some months ago in a disastrous political gamble – even by Italian standards – aimed at ousting their former coalition partners and seizing government, and now they end up adrift on an ocean of irrelevance, albeit with a fancy website.

To the liberal media, that nagging La Liga success is just too much to bear. So, it’s no longer the ‘populist’ tag they will hit them with, it’s ‘right wing,’ with all its fully-loaded historical baggage.

That should take the wind out of their sails. I’m not so sure. Okay, AfD and La Liga have had their problems, their controversial politicians and their difficulties in learning how the game of mainstream politics is played, but they will catch on.

The thing is, these ‘populists’ or new ‘right wing’ people not only look like us and speak like us, they are us. They are part of the new political landscape in Germany, Italy, France, the UK, Spain and other countries.

So, my dear liberal friends, maybe it is your time to look in the mirror, take a deep breath and think about where you really stand.

Read more here:: How the ‘Right’ has won: Liberals need a new go-to insult for disruptors

How the 'Right' has won: Liberals need a new go-to insult for disruptors
BASEBALL LOS ANGELES (AP) — Los Angeles Dodgers reliever Joe Kelly had his suspension for throwing pitches near the heads of Houston hitters reduced to five games on appeal. Kelly...
Likes

How the 'Right' has won: Liberals need a new go-to insult for disruptors
The captivation and celebration of the NFL have long stemmed from the speed, strategy, strength and teamwork that make the game go. Football is just as much a sport of...
Likes

How the 'Right' has won: Liberals need a new go-to insult for disruptors
Festering beneath France's promise of guaranteed health care for all lie deep disparities across economic and racial lines — differences laid painfully bare by the COVID-19 crisis. Two recent studies...
Likes