Islamic burials for al-Baghdadi and Bin Laden – but not Gaddafi? Cynical reality undermines US message in ‘war on terror’

Islamic burials for al-Baghdadi and Bin Laden – but not Gaddafi? Cynical reality undermines US message in ‘war on terror’ 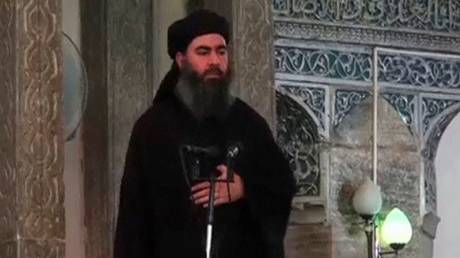 Citing “respect for Islamic custom” to speedily arrange burials at sea for Abu Bakr al-Baghdadi and Osama Bin Laden makes little sense, and the US attempt to win over hearts and minds in the Muslim world is worse off for it.

According to the US government, the self-proclaimed “caliph” of Islamic State (IS, formerly ISIS) killed himself when he was cornered by US special forces operatives in Syria’s Idlib province on Sunday. His remains were taken to an undisclosed facility for DNA testing, and after positive identification dropped into the sea at an undisclosed location. Islamic religious rites were administered beforehand, anonymous US officials told Reuters.

It is impossible to confirm any of this, as the Pentagon is not disclosing any recordings or photographs. The world will just have to take Washington’s word for it. Trouble is, this is the same Washington that has falsely claimed Iraq had weapons of mass destruction, Russia meddled in its 2016 presidential election, and that Turkish-backed terrorists holding Idlib were actually anti-IS “moderate rebels,” to name but a few examples.

While it does fan conspiracy theories by destroying evidence, burying a terrorist leader at sea has one obvious advantage: it denies their followers a physical location they could use as a rallying point. In the case of Bin Laden, allegedly killed during the 2011 raid in Pakistan, it may have also been convenient; the raid was launched from a US island base in the Indian Ocean, and the funeral reportedly took place on board the carrier USS Carl Vinson.

Here is where things get more than a bit cynical, though. Saying in public that both Bin Laden and Al-Baghdadi were given proper funeral rites amounts to selective respect for Islamic custom – the religion requires a burial on land when at all possible, for one thing. Secondly, both terrorist leaders claimed to have been acting on behalf of Islam, and the official descriptions of their demise went a long way to paint them as bad Muslims – from the talk of Bin Laden’s pornography stash to saying al-Baghdadi “died like a dog.”

Showing respect for a fallen enemy is a noble thing. However, what if the enemy in question is a terrorist responsible for all sorts of atrocities – committed in the name of religion, no less? Arguably, a partial observance of religious proprieties would seem to validate their cause and signal weakness, more than anything.

Then there is the matter of inconsistency. Just months after saying it went to great lengths to observe Islamic customs in Bin Laden’s burial, the Obama administration extended no such respect for Muammar Gaddafi of Libya – in fact, then-Secretary of State Hillary Clinton infamously cackled with glee when she got the news that Gaddaffi had been gruesomely murdered by US-backed militants.

Bin Laden had once been an eager participant in the US-backed jihad in Afghanistan. Ever since he turned on his former allies, the US has gone out of its way to point out that its “war on terror” was not a war against Islam as a whole. Making a big deal out of observing Muslim burial customs has obviously been part of that messaging strategy.

As the subsequent rise of the “caliphate” headed by al-Baghdadi graphically demonstrated, however, all too many in the Muslim world remained unconvinced.

Read more here:: Islamic burials for al-Baghdadi and Bin Laden – but not Gaddafi? Cynical reality undermines US message in ‘war on terror’

Islamic burials for al-Baghdadi and Bin Laden – but not Gaddafi? Cynical reality undermines US message in ‘war on terror’
The captivation and celebration of the NFL have long stemmed from the speed, strategy, strength and teamwork that make the game go. Football is just as much a sport of...
Likes

Islamic burials for al-Baghdadi and Bin Laden – but not Gaddafi? Cynical reality undermines US message in ‘war on terror’
Festering beneath France's promise of guaranteed health care for all lie deep disparities across economic and racial lines — differences laid painfully bare by the COVID-19 crisis. Two recent studies...
Likes

Islamic burials for al-Baghdadi and Bin Laden – but not Gaddafi? Cynical reality undermines US message in ‘war on terror’
Asian shares were mixed Thursday, cheered by the rally on Wall Street that's likely a boon for export-driven regional economies, but investors remained worried about the coronanvirus pandemic. Japan's benchmark...
Likes