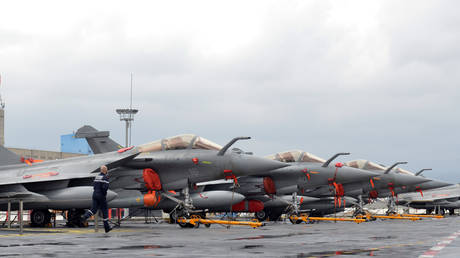 Paris will send two Rafale fighter jets and the naval frigate ‘Lafayette’ to the Eastern Mediterranean, France’s Ministry of Armed Forces said on Thursday. The move is part of plans to increase the country’s military presence in the region.

French President Emmanuel Macron has called on Turkey to halt oil and gas exploration in the disputed waters in that area, which has resulted in heightened tensions with Greece, Reuters said.

On Wednesday, the French president voiced concern over “unilateral” exploration by Turkey in a call with Greek PM Kyriakos Mitsotakis.

France sends 2 Rafale fighter jets & frigate to E. Mediterranean amid Turkey tensions
Ireland's best-known wedding planner, Franc, fears much of the event industry could be wiped out by next year.
Likes

France sends 2 Rafale fighter jets & frigate to E. Mediterranean amid Turkey tensions
Many will have enjoyed the autumn sunshine and none more so than the squirrel monkeys at ZSL London Zoo.
Likes

France sends 2 Rafale fighter jets & frigate to E. Mediterranean amid Turkey tensions
Tens of thousands of people calling for the authoritarian president of Belarus to resign have marched through the capital as the country's wave of protests entered its seventh week.
Likes