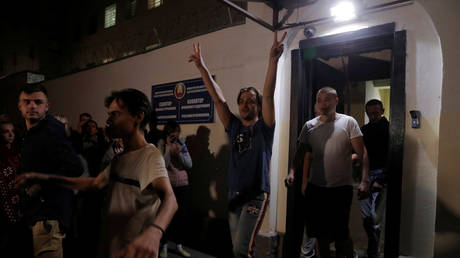 Belarusian deputy police chief Alexander Barsukov has vowed that all those who were taken into temporary custody amid unrest that has gripped Minsk after Sunday’s presidential election, will be released by 6:00 am local time Friday.

The official made the announcement as he was visiting a temporary detention facility in one of the capital’s boroughs, amid allegations that officers were brutalizing detainees there. Barsukov has rejected the claim.

Cities across Belarus have been swept by a wave of protests, occasionally escalating into violence and scuffles between demonstrators and law enforcement, after exit polls showed incumbent President Alexander Lukashenko winning about 80 percent of the vote in Sunday’s election. His critics, rallied behind united opposition candidate Svetlana Tikhanovskaya, have insisted that the government rigged the tally, demanding Lukashenko’s resignation. Around 6,000 people in total have been arrested across Belarus

Read more here:: All protesters detained in Minsk amid Belarus post-election chaos to be released by Friday morning – police chief

All protesters detained in Minsk amid Belarus post-election chaos to be released by Friday morning - police chief
Ireland's best-known wedding planner, Franc, fears much of the event industry could be wiped out by next year.
Likes

All protesters detained in Minsk amid Belarus post-election chaos to be released by Friday morning - police chief
Many will have enjoyed the autumn sunshine and none more so than the squirrel monkeys at ZSL London Zoo.
Likes

All protesters detained in Minsk amid Belarus post-election chaos to be released by Friday morning - police chief
Tens of thousands of people calling for the authoritarian president of Belarus to resign have marched through the capital as the country's wave of protests entered its seventh week.
Likes