If Columbus is being toppled, then Washington DC and Oklahoma need to be renamed: the inconsistent arguments for erasing history

If Columbus is being toppled, then Washington DC and Oklahoma need to be renamed: the inconsistent arguments for erasing history 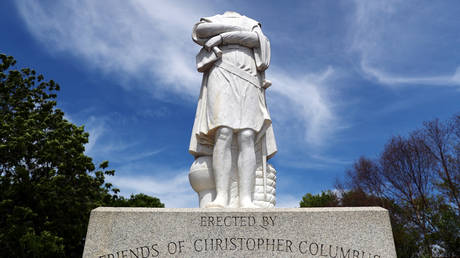 When a list of “problematic” monuments reads like a Who’s Who of eminent people from British history, it is clear that the Western world hasn’t figured out how to deal with contested historical figures.

For those at the back who haven’t been paying attention, it isn’t just obscure slave-traders like Edward Colston that iconoclasts have their designs on. The website ‘Topple the Racists’, which describes itself as a “crowdsourced map of UK statues and monuments that celebrate slavery and racism,” includes entries for William Gladstone, Sir Robert Peel, Lord Nelson, Captain Cook and Sir Francis Drake.

In the United States, over 150 monuments have been removed or designated for removal in the last few months alone. These include over 30 monuments to a single individual, the Italian explorer Christopher Columbus. (Statue removals, it seems, are even more irregular than buses: you wait ages for one and then 30 come along at once.) As readers may be aware, Columbus is no minor historical figure. Several countries around the world deem him sufficiently important that they hold an annual celebration to mark the date of his arrival in the Americas.

Iconoclasts aren’t just concerned about the physical presence of statues. There have also been calls – many of them successful – for buildings, lecture theatres and other entities to be re-named. (Such calls arise when an entity’s current namesake is determined to be on the wrong side of history.) As I have previously noted, Sir Francis Galton and his student Karl Pearson were both “de-named” at UCL earlier this year. More recently, Woodrow Wilson’s onomastic legacy at Princeton came to an end when the university decided to expunge his name from the School of Public and International Affairs, thereby reversing a 2016 decision to keep his name. (One’s understanding of history can change a lot in four years.)

So far, the principle guiding Western elites’ decisions concerning which historical figures should and should not be defenestrated seems to be: “Make stuff up as you go along.”

Today’s iconoclasm can arguably be traced to the Rhodes Must Fall movement that began at the University of Cape Town in 2015, as well as the movement to topple Confederate statues that has gained renewed support in the last few years. An initial argument against honouring people like Cecil Rhodes and Robert E. Lee was that they didn’t do anything particularly commendable (such as sign the Declaration of Independence), but they did do some things that are now considered despicable, so overall they don’t deserve to be honoured. They weren’t “complex figures,” in other words, but men of ill repute who ended up getting honoured because, at the time, they or their supporters had political power.

Yet even if one agrees with this argument, it can no longer be relied upon, since many of the targets of today’s iconoclasm did do some pretty commendable things (and almost everyone admits those things are commendable). Christopher Columbus re-discovered the Americas. Lord Nelson won the Battle of Trafalgar. Sir Ronald Fisher laid the foundations of statistics. William Gladstone thrice served as British prime minister. And Thomas Jefferson actually did sign the Declaration of Independence.

The argument now seems to be that if a historical figure did any one thing that is sufficiently bad (such as support eugenics in the case of Fisher, or oppose the abolition of slavery in the case of Gladstone), then he doesn’t deserve to be honoured, regardless of what other good things he may have done.

Another principle that today’s iconoclasts seem to have jettisoned is that people should be judged, by and large, by the standards of their time. Whilst Rhodes Must Fall and the movement to topple Confederate statues were focussed on figures from the relatively recent past (the late 19th century, to be specific), today’s iconoclasts are going after people born more than five hundred years ago. By this standard, practically every leader of every civilisation in history should be retroactively defenestrated.

Perhaps unsurprisingly, the argument that one sufficiently bad thing is enough to vitiate someone’s legacy has not been applied in a consistent way. Despite opting to rename Calhoun College because John C. Calhoun defended slavery, Yale University has thus far maintained a “carry on, nothing to see here” attitude about the role of its namesake, Elihu Yale, in slavery and colonialism. Of course, Yale may sincerely believe that Calhoun (born 1782) was a monster, whereas Yale (born 1649) was a “complex figure” like any merchant from the East India Company who served as governor of Madras. One suspects, however, that other considerations are involved. (Note that ‘Topple the Racists’, the website mentioned above, includes an entry for Elihu Yale.)

A second argument made by contemporary iconoclasts is that certain demographic groups should not have to be reminded, when confronted with statues in the public square, of the oppression that was wrought upon their ancestors. For example, statues of slave-owners might remind black people of slavery, while statues of Columbus might remind native Americans of colonisation.

But regardless of whether the argument is extended to other groups, it would still imply we had some pretty sweeping changes to make. For if statues of Columbus are a painful reminder of historical injustice, then the same must be true of the nation’s capital: Washington, District of Columbia. Statues of Columbus can at least be avoided (confined, as they are, to particular locations), but the nation’s capital is mentioned in the news almost every day. In fact, ‘Washington’ too is “problematic”, given that the man was a slave-owner, and someone may soon discover that ‘District’ has some hitherto unknown nefarious connotation.

Reasoning from the iconoclasts’ own premises, the case for renaming Washington, DC – or for that matter, Yale and Columbia – is arguably stronger than the case for taking down statues of, say, Edward Colston, whom nobody outside Bristol had heard of until recently. Being invoked in the name of America’s capital city, or New York’s most prestigious university, is much more of an honour than having a statue of oneself in the UK’s eighth largest city. Hence, if one supports taking down statues that have invidious connotations, one ought to get with the renaming program too.

And why stop at the nation’s capital city? “Oklahoma” means “red people” in the Choctaw language, so that one surely has to go. What’s more, there are dozens of places named after slave-owners and people who defended slavery.

Since the “woke” Cultural Revolution got underway this year, countless monuments have been toppled (even an elk statue was lost in Portland), and many figures have had their legacies tarnished. But the arguments supporting such action haven’t been applied consistently, and if they were, it’s likely that many fewer people would accept them. Perhaps there ought to be a bit more discussion before this iconoclastic project goes any further.

Read more here:: If Columbus is being toppled, then Washington DC and Oklahoma need to be renamed: the inconsistent arguments for erasing history

If Columbus is being toppled, then Washington DC and Oklahoma need to be renamed: the inconsistent arguments for erasing history
BASEBALL LOS ANGELES (AP) — Los Angeles Dodgers reliever Joe Kelly had his suspension for throwing pitches near the heads of Houston hitters reduced to five games on appeal. Kelly...
Likes

If Columbus is being toppled, then Washington DC and Oklahoma need to be renamed: the inconsistent arguments for erasing history
The captivation and celebration of the NFL have long stemmed from the speed, strategy, strength and teamwork that make the game go. Football is just as much a sport of...
Likes

If Columbus is being toppled, then Washington DC and Oklahoma need to be renamed: the inconsistent arguments for erasing history
Festering beneath France's promise of guaranteed health care for all lie deep disparities across economic and racial lines — differences laid painfully bare by the COVID-19 crisis. Two recent studies...
Likes